And other microwave questions

Rumors have circulated for years regarding the safety of using microwaves. But are they actually causing harm to our food and our bodies?

Take a big sigh of relief over that microwave popcorn you just ate, because microwaves are perfectly safe and actually one of the best methods of cooking and heating food.

Let’s examine how they work. Microwave ovens contain an electron tube called a “magnetron” which produces small electromagnetic waves (micro-waves). These waves cause the water molecules in food to vibrate, which produces heat.

Why is this a good way to cook food?

Nutrients are broken down whenever food is cooked in general, but more is lost from food when they are cooked for too long or with too much processing. Boiling, for example, causes vegetables to lose many of their nutrients in the water. Cooking foods in the microwave is actually one of the best ways to preserve nutrients because it cooks foods quickly and with little or no water, especially compared to foods cooked in the oven. Cooking vegetables in a covered bowl in the microwave, which is essentially steaming them, is one of the best ways to preserve their nutrient content.

But what about radiation? Don’t microwaves emit harmful radiation?

Much like cell phones and the wifi in your home and pretty much everywhere around you, microwaves emit a small amount of radiation, but not nearly enough to cause any harm. The FDA sets very strict regulations on the amount of radiation that can leak from a device, and the amount allowed by this standard is far smaller than any amount that could cause damage.

Is it bad to use plastic containers in the microwave?

Any container that wasn’t designed specifically to be used in a microwave can melt and leak into foods. These chemicals can be harmful. Most products will have a warning if they should not be microwaved, or a label that they are “microwave safe.” Many plastics today are designed to do fine in microwaves. A microwave shifts the magnetic fields of a substance, which affects water greatly, but certain plastics, glasses and ceramics aren’t very polar, so don’t respond to magnetic changes. When in doubt, use something known to be microwave-safe. In general, avoid microwaving plastic containers that were made to hold dairy products or condiments (looking at you thrifty kitchen masters).

Why do microwaves cook unevenly?

Many believe that food cooked in a microwave is heated from the inside out, but microwaves are actually only able to penetrate food near the surface, which is why cooking thicker foods often leaves cold spots. A tip: spread your food out and even create a space in the middle of the plate before microwaving.

Previous Fashions Trends That Rose From the Dead

Next Does It Matter If I Use My Laptop on My Lap, Or Should I Use a Desk? 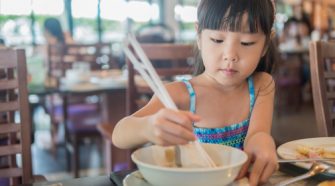