Why and How to Punish Children

Why healthcare coverage is often a meager blanket, and which alternatives are winning new followers

Much of the healthcare debate revolves around the uninsured, but those with health insurance are facing a stark reality of their own: insurance is often not the security they need.

Employer-sponsored insurance covers half of the non-elderly population, or about 150 million people. A Kaiser Family Foundation survey of employer health benefits over the last decade found drastic increases in what covered employees and their employers today are asked to pay for healthcare. From 2006 to 2016, the survey found, annual premiums for family coverage went up by 58%, from $11,480 to $18,142. In 2006, the average worker contribution was $2,973, and the average employer contribution was $8,508. In 2016, by comparison, the average worker contributed $5,277, while the employer contributed $12,865 annually.

Premiums have gone up consistently for the last decade, we get it. But at this point, the chunk coming out of a worker’s paycheck has escalated from an annoyance to a significant financial burden. In fact, some insured people still can’t afford their medical bills. And don’t forget that deductibles have also shot up in the last decade. In 2006, the average deductible for all covered workers was $303. In 2016, the average deductible was $1,221 for single covered employees. Deductibles for family coverage are generally more than double that.

So consider this: someone who has health insurance for their family through their work can expect to dish out about $7,277 per year for healthcare coverage ($5,277 in premiums, $2,000 for the deductible) before they actually receive any benefit. Oh, and the Kaiser report found that 67% of covered workers face a copayment whenever they visit a doctor, and 25% of covered workers have coinsurance, meaning that even after reaching the deductible, they pay for a percentage of care. So $8,000 is probably the more realistic number. Remember, this is after the employer has already forked out $12,865 for coverage for the family.

$7,000-$8,000
What typical families with health insurance can expect to pay in a year before insurance starts contributing to medical bills. This includes premiums and the deductible.

Looking at numbers like these really grinds the gears of many Americans, especially those who are are younger and healthy. This nagging thought can’t help but come to mind: would I be better off without insurance?

Even if a family incurred $5,000 in medical bills over a year, having no insurance would still be significantly cheaper than having insurance, which is insane. It’s not until you start talking about severe medical costs that insurance becomes the good guy. On one hand, a single surgery will probably make a family very grateful for insurance. On the other hand, a few years of never meeting your deductible likely means more than $15,000 in lost income. That’s a pretty expensive safety net. 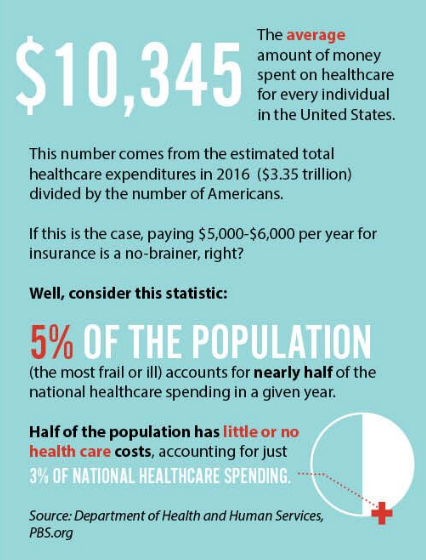 Who Spends What On Healthcare?

$10,345
The average amount of money spent on healthcare for every individual in the United States. This number comes from the estimated total healthcare expenditures in 2016 ($3.35 trillion) divided by the number of Americans.

If this is the case, paying $5,000-$6,000 per year for insurance is a no-brainer, right? Well, consider this statistic: 5% of the population (the most frail or ill) accounts for nearly half of the national healthcare spending in a given year. Half of the population has little or no health care costs, accounting for just 3 percent of national healthcare spending.

Other Ways To Pay For Healthcare

While some might opt to roll the dice without insurance, most won’t put their family’s welfare in jeopardy. More and more employers and individuals are finding alternatives to traditional options.

An intriguing option, especially for the religious community, are Christian cost sharing ministries. Members of these groups are exempt from individual responsibilities of the Affordable Care Act (ACA). In fact, the ACA specifically protects these health care sharing ministries if they are nonprofits that existed before 1999 whose members share common ethical or religious beliefs.

Several large organizations exist under this description. All members must be professed, practicing Christians. Depending on the group, members must not use tobacco, drink alcohol, or use illegal drugs. In this way, religious people have united to create a more efficient population for insurance, meaning premiums are lower, and benefits are better.

Members pay monthly for membership, similar to an insurance premium. For Christian Healthcare Ministries (CHM), one of the largest cost sharing organizations, members of the gold program pay $150/month per person, and CHM shares 100% of the bills for any medical incident exceeding $500, up to $125,000.

And these groups aren’t small or exclusive. CHM, for example, is in all 50 states, and has shared more than $2.5 billion in medical bills. The Alliance of Health Care Sharing Ministries, which consists of three ministries, has almost 900,000 members. The larger groups have open membership to any believer.

A Health Savings Account, or HSA, is a savings account that can be used to pay for qualified out-of-pocket medical expenses using pre-tax dollars.

The most common route people take with HSAs is to have high deductible catastrophic insurance, and combine it with regular contributions to their HSA savings. This lowers the monthly premium, and allows them to build a tax-free savings account for future expenses. Whereas traditional insurance leaves no lasting asset for the insured, and HSA is a permanent fund that doesn’t expire.

Another option is to just have a savings account set up for health insurance. Online bank accounts like Ally and others offer 1 – 1.2 percent interest. Of course, the big disincentive here is the chance of catastrophic medical expenses. In addition to the risk involved, the ACA sets a fee for not having insurance, which is 2.5% of your household income, though the fee maxes out at the cost of a yearly premium for the national average price of a Bronze plan. Or the the fee is $695 per adult, and $347.50 per child under 18, with a maximum of $2,085. You’ll pay whichever calculation is higher.

But, the individual mandate that is the lifeblood of the Affordable Care Act has a target on its back. Republicans are trying to find ways to get rid of the mandate and any associated penalties. 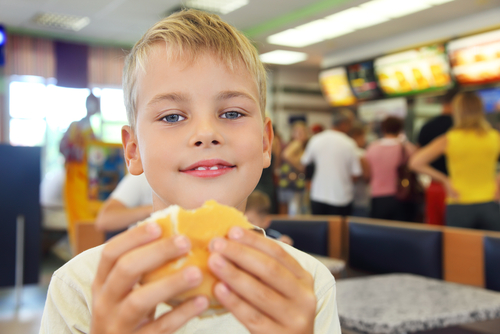